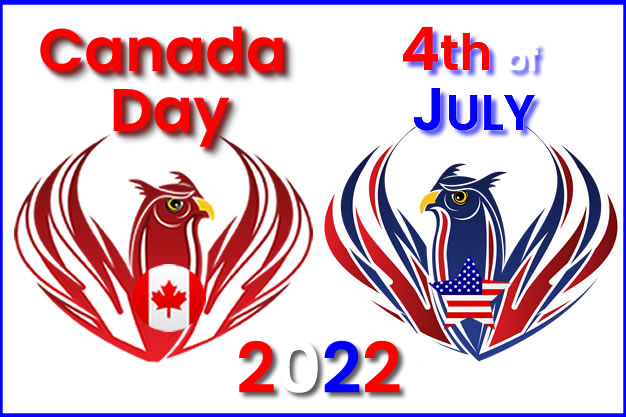 The progress of independence has been met with fireworks.   The complexity of each nation, Canada and USA, who celebrate independence on July 1st and July 4th,  had become more pronounced in recent years.

The social issues have been in the news.  The treatment of indigenous people, those of different backgrounds and inclinations, the convoy of truckers, the deadly shooting in Texas and other states, the protests and and anger over Roe v. Wade have hijacked the holiday weekend celebrations.

Canada has grappled with a string of anti-Muslim attacks. It’s also discovered hundreds of unmarked graves at former residential schools for Native children.

This is the 155th anniversary of Canada’s independence.  Canada flew the British Union Jack until 1964 when the Canadian Maple Leaf flag was introduced.

July 1776, Richard Henry Lee of Virginia presented a resolution with the famous words: “Resolved: That these United Colonies are, and of right ought to be, free and independent States, that they are absolved from all allegiance to the British Crown, and that all political connection between them and the State of Great Britain is, and ought to be, totally dissolved.”  The original copy of the Declaration is housed in the National Archives in Washington, D.C

This year, 2022, will be the first year since the pandemic lock down, that fireworks will be displayed for the public to enjoy in both Canada and USA.  Diversity is showing up in pride parades and celebrations. Each town, each city, each province, each state has numerous opportunities to view Independence Day fireworks.
.

.
“Dreams can grow wild born inside a child.” From Dream to Enhavim #enhavim
.
“I think patriotism is like charity — it begins at home.” Henry James
.
“We must be free not because we claim freedom, but because we practice it.” William Faulkner
.
“Those who won our independence believed liberty to be the secret of happiness.” LD Brandeis
.
“The life of the nation is secure only while the nation is honest, truthful, and virtuous.”  Frederick Douglass
“It will be celebrated with pomp and parade, bonfires and illuminations from one end of this continent to the other.” John Adams
.
“Ask not what your country can do for you, but what you can do for your country.” JF Kennedy
.

“Duty, honor, country. Those three hallowed words reverently dictate what you ought to be, what you can be, what you will be.”  General MacArthur

“In the truest sense, freedom cannot be bestowed; it must be achieved.” FD Roosevelt

“The legacy of heroes—the memory of a great name, and the inheritance of a great example.” Benjamin Disraeli

.
“Je me sens vraiment entre amis. (I feel that I am truly among friends.)” JF Kennedy
.
“Geography has made us neighbors. History has made us friends. Economics has made us partners. And necessity has made us allies. Those whom nature hath so joined together, let no man put asunder.” JF Kennedy
.
“On both sides of the line, we are so accustomed to an undefended boundary three thousand miles long that we are inclined perhaps to minimize its vast importance, not only to our own continuing relations but also to the example which it sets to the other nations of the world.”  FD Roosevelt
.
“Canada and the United States have reached the point where we no longer think of each other as ‘foreign’ countries. We think of each other as friends, as peaceful and cooperative neighbors on a spacious and fruitful continent.” Harry Truman
.

“I think that Canada is one of the most impressive countries in the world, the way it has managed a diverse population, a migrant economy. The natural beauty of Canada is extraordinary. Obviously there is enormous kinship between the United States and Canada, and the ties that bind our two countries together are things that are very important to us.”  Barack Obama

“There are no closer friends that we have than the Canadians. And we share values, we share culture. The ties between our people are extraordinary. We are NATO Allies, and across the board, our interests align.” Barack Obama
.

A country, after all, is not something you build as the pharaohs built the pyramids, and then leave standing there to defy eternity. A country is something that is built every day out of certain basic shared values.”
— Pierre Trudeau

As Chief Legacy Officer you build your legacy like a country based on value you create and values you uphold.