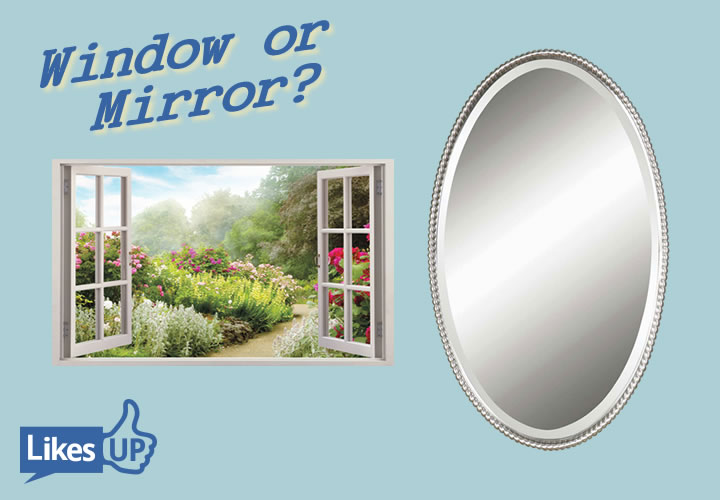 There was a time where our world was stalked by Lions and Hyenas and it made good sense for stories of monsters to be spread to keep wandering toddlers from wandering too far from their guardians.

The conjuring up of these scary stories requires quite a bit of brain arousal. The problem is that adults in 2021, with a lack of REAL day to day threats on our life – we haven’t learned how to slow the brain down or discern a story from reality.

Let me explain.Imagine a man standing at a closed glass window opposite his fireplace, looking out over his garden at sunset. He is so absorbed by the view of the outside world that he fails to visualize or think about the interior of the room he is standing in, at all. As it becomes darker outside, however, images of the objects in the room can be seen reflected dimly in the window glass. For a time he may either see the garden (if he gazes into the distance) or the reflection of the room’s interior (if he focuses on the glass a few inches from his face).

Night falls but the fire still burns brightly and illuminates the room. The observer now sees in the glass a vivid reflection of the interior of the room behind him, which appears to be outside the window. The illusion becomes dimmer as the fire dies down, and finally, when it is dark both inside and outside nothing more is seen.I f the fire flares up from time to time the visions in the glass reappear. In an analogous way this is how the fake stories are created; the daylight represents sensory input. It’s real evidence.

As real evidence fades or sensory input is diminished but the “Interior illumination”, the general level of brain arousal, remains the same the images within the “rooms” of our brain are perceived as though they are coming through the “windows” of our senses”

In other words: When our busy brains have contact with reality, we look out the window and see, often, what is really there. But when we lose contact reality (sensory input) the images, thoughts, fears and anxieties coming from within start to appear as if they are coming from “out there”.

We think we are looking out the window when we are in fact looking directly into a mirror. “They’re laughing at me” “They don’t like me”“The world is an evil place” “My audience will never respond to XYZ”“Nobody can be trusted, it’s world of snakes out there” “Everyone is watching, if I fail I’m ruined”…etc etc etc.

These things feel real. In fact, you might even be certain that you are looking out the window right now and can SEE the evidence that these monsters are real. Better make sure that you’re not mistaking a mirror for a window.

It was in 1970 that John Mack said: “The capacity to establish and maintain a clear distinction between the life of dream and the life of the outside world is hard-won and requires several years to accomplish.” And the only way to with this capacity is to get out of your own head and get real world evidence.

Never mistake a mirror for a window.