Why and Who Do You Influence? 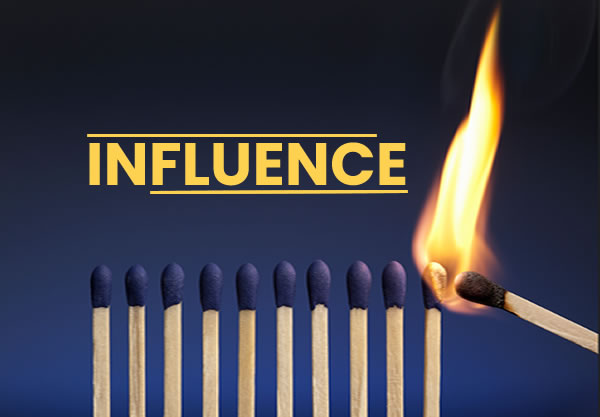 Why and Who Do You Influence?

Influence affects the actions, decisions, opinions, or thinking of others.

The ancient influencers from the 3rd century BC, the Stoics, were a group of ancient Greek and Roman philosophers who followed a realistic but morally idealistic way of living. Many today want to follow in their footsteps and their school of thought.

Modern day social media puts a spotlight on influencers.  Are you methodically speaking (texting) to influence others?

You may step into the role of a social media influencer.  Here are a few descriptions taken from the web:

A social media influencer is an individual who utilizes a variety of social media platforms to express their opinions on specific brands or products, consequently influencing their captive audience.

What is a Social Media Influencer? An influencer is a content creator with a social media following. Social media influencers develop a following by sharing quality content that inspires, entertains, informs, and connects them with their followers.

Influencers in social media are people who have built a reputation for their knowledge and expertise on a specific topic. They make regular posts about that topic on their preferred social media channels and generate large followings of enthusiastic, engaged people who pay close attention to their views.

A social media influencer is a person who has the ability to affect the buying decision of other people (usually followers) because of their position, authority, and relationship with their audience. Usually, these individuals (the influencers) have a great following in a niche they’re working on.

Forbes, on Valentine’s day, February 2020 just before the pandemic lockdown, had its own take on social media influence.

Below, from article by Peter Suciu: Is Being A Social Media Influencer A Real Career?

Chances are even if you don’t “follow” a social media influencer or even totally understand what they do you’re likely to understand the concept. Influencers are those individuals who have essentially established credibility in a specific area or industry. To be successful they need to have access to an audience, preferably a large audience – hence their “influence.”

Apparently, a lot of people not only appreciate what an influencer does, but a majority of social media consumers actually want to become influencers!

According to a recent survey conducted by IZEA Worldwide, an online marketplace that connects brands and publishers with influential content creators, many social media consumers actually see the benefits of influencers with 56% of respondents saying they made a purchase based on a sponsored/paid social media post from an influencer.

Moreover, 63% said they find the content created by such influencers to actually be more compelling than scripted advertising. That could explain why 67% of social media consumers even said they’d like to be a paid social media influencer for their favorite product or brand – and 30% said they consider themselves to be an influencer.

The Next Big Influencer

We’ve seen many famous people – even those who are in essence “famous for being famous” become influencers, but is celebrity a requirement?

“With time and commitment, and consistent effort, it is possible for an average person to become a successful influencer,” said Sinead Norenius-Raniere, vice president, influencer marketing & paid social at Valassis.

“Most start blogging or sharing on YouTube as a passion project or side hustle,” said Norenius-Raniere. “Success does not happen overnight. You must build enough content and this process can sometimes take years in order for your platforms to support you financially. But it is totally possible for it to lead to a full-time career.”

So why isn’t everyone doing it – or could they?

One group that C4 Trends perceives as providing an unclear career path are influencers in the world of gossip that goes well beyond the tabloids and traditional celebrities.

“These gossip influencers use Instagram accounts, Snap channels, TikTok pages,” added Schreiner. “Profitable media companies have been built around which YouTuber is dating which Twitch streamer, who’s breaking up with whom, and who’s possibly cheating. While this economy is growing, even when the people they’re obsessing over are known only to a small segment of the general population – this might be more of a career with questionable sustainability.”

Alternatively, there’s also a segment of professionals who have risen to the level of a social media influencer as a byproduct of their expertise in a given subject.

“They are corporate executives, thought-leaders, scientists, academics, corporate executives, and others,” noted Schreiner. “The Internet and platforms like Twitter and LinkedIn, provide these influencers with a social media presence and a stage to communicate their expertise to a wider audience than if they just wrote a book, for instance. For these influencers this social media presence may result in becoming a mini-celebrity and the rewards of receiving increased professional recognition along with additional associated professional benefits.”

In many cases it isn’t important for a potential influencer to even have a huge following at the start, suggested Norenius-Raniere, who has been in influencer marketing since 2008 – before the world really took the concept seriously.

“A huge following is not critical – most of the influencers we use at Valassis for campaigns have between 10,000 to 100,000 followers,” she noted.”We look for influencers who haven’t used bots to grow their followings, who have a distinct voice, and produce high-quality. We understand that building a following today is way more difficult than it was even five years ago.”

Influencers aren’t likely to be a “flash in the pan” either, but their role in the future of marketing will continue to evolve and develop.

“Millennials have developed an even deeper trust for influencers with 48% noting heightened trust,” said Norenius-Raniere. “Consumers like to hear from a third party, especially when it is someone they have come to ‘know’ after following them on their respective social channels and are open to their point of view or recommendation. Influencer marketing, when done right and with the proper strategy in place, will continue to prove to be a powerful tool in your marketing mix. But it needs to be part of a multichannel marketing mix, not your only marketing tool.”

Given the facts laid out above, it does seem that social media influencer could be a valid career – but perhaps not an easy one, and certainly not for everyone.

It isn’t about just loving a product, but by understand the concepts and tenets of marketing.

“The segment that actually provides a career path are social influencers who have become powerful allies in the marketing world,” said Schreiner. “There’s been an explosion of interest in influencers among advertisers, marketers, and brands. The world of micro- and nano-brand influencers is fairly new, and it’s only really been in the last two years or so that the field of influencer marketing has gained serious traction.”

More importantly some influencers could actually find their way into a larger career.

“If someone is looking for a career in marketing, knowing how to become a social media influencer is certainly a profession for this decade, and the future of work,” Schreiner added. “Increasingly, influencers are driving brand awareness, brand affinity and growth as reflected in metrics such as social and web traffic, content and sales. If you look at the state of social media and how it continues to change the way we interact and communicate with one another, I only see influencer marketing growing.”
###

Influence in print: This book, Invisible Influence: The Hidden Forces That Shape Behavior, by Jonah Berger, a marketing professor at The Wharton School of the University of Pennsylvania. He outlines the ways in which our behavior is affected by others and examines our constant struggle to maintain the balance—not too different and not too similar. Berger helps readers not only to recognize the ways they’re being influenced, but also to provide concrete suggestions for how to take advantage of the upsides of influence and avoid its downsides.

Of course, there is the classic by Dale Carnegie first released in 1936, How to Win Friends and Influence People and has sold multiple millions if copies. This book is a timeless bestseller, packed with rock-solid advice that has carried thousands of now famous people up the ladder of success in their business and personal lives. As relevant as ever before, Dale Carnegie’s principles endure, and will help you achieve your maximum potential in the complex and competitive modern age an how you can influence in a positive way.