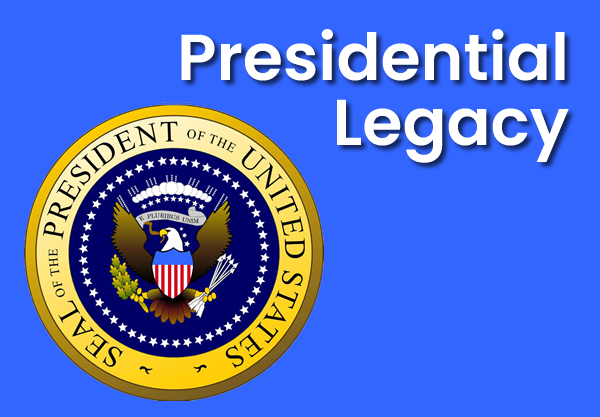 Five American Presidents with unlikely legacies from helping legitimize paleontology to receiving a film-writing credit while serving as POTUS!

Teddy Roosevelt was a famous coffee fiend, known to tromp about the White House swigging from a mug “more in nature of a bathtub,” according to his son. Consummate leader that he was, Teddy instilled those pro-java values in his family, and in 1919, his daughter and her husband, his three sons, and a cousin opened a cozy chain of New York coffee shops called the Roosevelts’ Brazilian Coffee House—later renamed the Double R Coffee House—with four locations in New York City.

Those relaxed cafés were designed as an antidote to the cramped, get-in-get-out roasters that catered primarily to new immigrants in Manhattan. According to Roosevelt’s son Philip, the Double R intended to “provide a place for people to talk, write letters, eat sandwiches and cake, and above all, drink real coffee.” Imported beans were roasted on-site and prepared at a counter in the middle of the store, providing the template for what would become an American business staple decades later. Naturally, Teddy’s grinning portrait hung from the flagship store’s wall—a mark of approval from one of the White House’s biggest coffee-snobs-in-chief.

A true Renaissance nerd, Jefferson pursued scholarly interests both famous (authoring the Declaration of Independence) and overlooked (rebuilding the burned-down Library of Congress with more than 6,400 books from his own collection). But his oddest hobby? Bone collecting.

In the early 1800s, paleontology was as rough around the edges as America was. Jefferson, for one, believed it impossible that any species could go extinct. So in 1804, he funded the Lewis and Clark expedition in partial hopes that they would track down a herd of live woolly mammoths alleged to roam the Mississippi River Valley.

The mammoths weren’t there, but their bones were. This was incentive enough for Jefferson to finance Clark on an 1807 follow-up mission to Kentucky with the express purpose of collecting fossils. The trip turned up more than 300 bone samples, which Jefferson gleefully spread out across several rooms of the White House for study. Rarities, like the mammoth skull, he kept for America; duplicates, he mailed to France.

Ultimately, Jefferson’s nerdy hobby helped legitimize paleontology in America, even as it led critics to call the president Mr. Mammoth. He gifted at least 50 mastodon bones to the American Philosophical Society and was key in identifying a giant, extinct sloth never before seen in America. It was later named Megalonyx Jeffersonii.

One day in 1935, FDR met with a friend to discuss a matter of national import: the declining quality of mystery novels.

“Hundreds are published every year, but even in the good ones, there is a sameness,” Roosevelt told his lunch companion, Liberty magazine editor Fulton Oursler. “Someone finds the corpse, and then the detective tracks down the murderer.” Oursler asked Roosevelt if he had any better ideas. Turns out, he did.

FDR wondered, how could a well-known businessman disappear with $5 million of his own money and never be traced? Though Oursler wrote his own mysteries under the name Anthony Abbott, he didn’t have an answer for FDR—but he knew who might. Soliciting chapters from six of the day’s top mystery writers and contributing one of his own, Oursler expanded Roosevelt’s idea into a serial mystery published over six issues of Liberty and later as the book The President’s Mystery Story. Within a year, Hollywood adapted it as The President’s Mystery, billing it as “Franklin D. Roosevelt’s tale of suspense.” As if his legacy needs any more burnishing, FDR remains the only president to earn a film-writing credit while in office.

Abraham Lincoln literally refused to harm a bug; as a young boy in Kentucky, he once scolded his playmates: “An ant’s life was to it as sweet as ours to us.” Abe loved dozens of animals throughout his life, bringing to the White House a veritable petting zoo of rabbits, goats, ponies, and a trio of orphaned kittens rescued from a Union army camp—but he may have adored his yellow mutt, Fido, most.

Sadly, Fido was too big and skittish to join the Lincolns in the White House in 1861, but he joined his new owners at the Springfield train station for Abe’s farewell speech. When Lincoln’s casket returned home in May 1865, Fido was there to greet it. Funeral coverage turned Fido “the Lincoln Dog” into the most famous mutt in America, his name suddenly synonymous with the family pooch. A century and a half later, it still is.

When Ronald Reagan wanted to give up pipe smoking in the 1960s, he decided to replace one vice with another. He went with jelly beans.

After the Goelitz company debuted its Jelly Belly brand in 1976, Reagan became such a fan that he ordered three and a half tons of red, white, and blue beans for his 1980 inauguration party. For the rest of Reagan’s term, Jelly Belly was a White House staple. The president offered custom jelly bean jars to visiting dignitaries, made sure all his haunts on Capitol Hill were well stocked, and even installed a custom bean holder on Air Force One. Thanks to Reagan’s free publicity, Jelly Belly had a backlog of orders for more than a year, and it wasn’t long before business literally rocketed through the stratosphere. In 1983, astronauts aboard the space shuttle Challenger opened a package from the president. The contents? What else but Jelly Belly.

See also: As often the case with presidential legacies, no matter what a president does while in office, a legacy is crafted by those who come after.

“Presidential legacy” represents how a President may be remembered by future generations. Lincoln’s legacy was ending slavery and keeping the country united.  F.D. Roosevelt’s legacy is his New Deal innovative policies that kept the USA together through the Great Depression and World War II.

President J.F. Kennedy demanded removal of Soviets missiles in Cuba in late 1962, then he skillfully transacted a diplomatic settlement which kept the two countries at peace. The popular legend of John F. Kennedy superseded reality and his assassination on November 22, 1963, hastened his coronation and in death, he became a cultural icon. The idealism that Kennedy evoked did not die with him. Kennedy left a legacy of hope to millions of Americans.

President Barack Obama: The single undeniable aspect of his legacy is that he demonstrated that a black man, an African-American, can become president of the United States.

Determinants of Presidential Legacies  on jstor.org